Conjure up all that in your mind and you have an idea of what to expect from wildly colourful Durban band South Jersey Pom-Poms, a quirky and upbeat quintet whose original music is rousing, happy and snappy, often amusing, sometimes poignant and broody, and always impressive.

It is uncommon for Roland Stansell, entertainment co-ordinator of the three Rhumbelow Theatre venues, to book acts purveying all-original music, but by taking a chance with this delightful group of mischievous and versatile musicians he has hit the jackpot once again.

Billed as “a little detour; a cabaret-style romp through the tawdry world of smoke and mirrors “, the show – first staged in May at the Rhumbelow Theatre’s Kloof branch at Tina’s Hotel – has elements of the absurd, loads of toe-tapping original music and much that will make you smile.

It also boasts an attractive lead singer in wild-maned Belinda Henwood, perhaps more widely known as an award-winning actress with the KickstArt theatre company, for whom the band composed original music for last year’s children’s show, James and the Giant Peach.

Henwood, who has been seen on the local stage for years, more recently as piglet in Winnie the Pooh and as the good fairy in KickstArt’s annual pantos, is a charismatic stage presence and here features not only her fine vocals but also her skills on piano-accordion and keyboards.

She and her four male sidekicks arrive on a small stage where white light bulbs frame a silver, tinselly curtained doorway and the band’s moniker is illuminated in yellow lights. This is alongside a raised, centre-stage TV screen on which, throughout the show’s two acts, are beamed black-and-white video footage and still images.

We see a kaleidoscopic mix of footage, including random clips from TV’s American Horror Story, The Lone Ranger, Cabaret, Sweet Charity and Charlie Chaplin’s The Circus, during the course of a show which has Henwood arriving in a gypsy dress, with long hair extensions and white ribbons, to sprout mumbo-jumbo while wearing a Viking helmet… then raising a small discoball to rise to the ceiling. Yep, I did say it was offbeat.

Henwood’s sidekicks are all jolly fellows, each in fancy dress. Among them is Anthon Cawthorn-Blazeby – a standout, but not only because he arrives with fake breasts, a beard and a large, white ostrich feather on the right shoulder of his satin shirt. He is an excellent violinist, who will be remembered as a member of local instrumental band Landscape Prayers, and has a total jol in this show – watch for his moment with a hip flask! – while perfectly showcasing his  talent.

Also here are bassist Sean Stewart (with a pirate suit, tophat and goggles), a long-haired Jochen Zeller on guitar and vocals, and an amusing, kilted Grant Emmerich on the drums.

The programme is rich, fun and varied but I would agree with some who felt that even one rearranged cover song in the first half would lend more variety. Doing so should appease an audience that generally needs some slow weaning when it comes to something other than the tribute showbands for which the Rhumbelow theatres are known.

The second half’s nod to Ghost Riders in the Sky and the finale number, a novel rendition of Cher’s Bang Bang (My Baby Shot Me Down), work a treat.

That said, allow yourself to surrender to the South Jersey Pom Poms’ sound and you will be amply rewarded. I loved the catchy Fashion and Science, found Drunken Bulgarian Girls a hoot, and a song about “sticker families” will have you smiling throughout. Amusing, too, is He Bought a New Face in America in which bassist Stewart leaves the stage for some monkey business. I won’t say more, so as not to ruin the surprise. 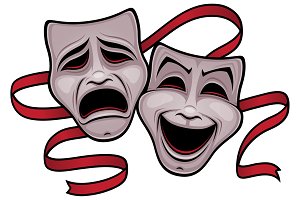 Also of note are the group’s varied original songs in French, German and Italian, and I loved a moment which has band members donning items of clothing that become illuminated.

The show has performances this weekend only – at 8pm on Friday and Saturday (August 24 and 25) and 2pm on Sunday (August 26). I urge you to attend for a truly joyful experience.

Tickets cost R150 each and booking is at Computicket outlets or by calling Roland at 082 499 8636. Note that seating is at tables of eight, and the theatre venue opens 60 minutes before the show . One can take along eats but all beverages have to be bought at the theatre’s bar.