WHAT WOULD YOU SAY TO PEOPLE TO ENCOURAGE THEM TO SEE THIS PRODUCTION OF “WOZA, ALBERT”,  A CLASSIC PIECE OF ’80S PROTEST THEATRE CENTRED ON HOPE FROM A SAVIOUR (MORENA) COMING TO SOUTH AFRICA?

I think people should see this production to see two of South Africa’s great actors , Mbongeni Ngema and Percy Mtwa, performing – and particularly to see them in a revival of a play that brought them to an international audience and established their careers.

Also, Woza Albert is, and has long been, a set text in schools. I was surprised at how the younger audience, at the previews, engaged with the production for the first time and connected with the politics of the play.

THE PLAY DEALS WITH RACISM,  POVERTY AND INEQUALITY VIA EVERYDAY SOUTH AFRICAN CHARACTERS, ALL PLAYED BY THE TWO ACTORS. HOW RELEVANT IS THIS WORK TODAY?

When working on this production we discussed how we could not just present Woza, Albert as apartheid nostalgia. Any play has to, somehow, connect with an audience in terms of the current context. Theatre is, after all, ‘live’.

The Marxism, the class politics, that informs much of the play emerges very clearly and provides a bittersweet commentary on post-apartheid South Africa.

Aunty Dudu is still eating scraps from the rubbish dump; the small boy is still selling meat at the roadside and is not in school; displays of consumption still surround us at Sun City and the various casinos and malls.

Also, the play provides dark warnings of how, after the celebrations of Morena’s return, the State will reassert its authoritarian power through the police and military. For those who have ears to hear, they may think of Marikana.

In the ’70s and ’80s many of us who supported, or participated in, the struggle against apartheid and colonialism believed passionately in the Freedom Charter and the Communist Manifesto. All that seems to have been discarded now.

IT MUST HAVE BEEN INTERESTING WORKING WITH THE CREATORS AND ORIGINAL PERFORMERS OF THIS CLASSIC PLAY. HOW WAS THE REHEARSAL PROCESS?

I had worked with Mbongeni Ngema a number of times and we have a good working relationship and high level of trust. Ngema is the easiest actor I have ever had to give a note to or seen take a note.

I had not met Percy Mtwa until this project.  It was wonderful to see him come back on stage after so long. He is really good. This takes enormous courage, which he has.  It was lovely to establish a working relationship and friendship with him.

We started the rehearsals by letting the guys remember the staging and re-establish their working relationship. Then we worked to restage the play for a more contemporary audience; the swift and smooth transitions between scenes; how to fit the play to the actors more mature instruments; and how to engage a more contextually relevant subtext for the play.

ANY FUN OR OTHERWISE INTERESTING ANECDOTES YOU CAN SHARE FROM ‘WOZA, ALBERT” REHEARSALS?

The whole process was just very smooth.  It was demanding, physically, on the actors and in that sense, hard.

WHEN, WHERE, HOW AND WITH WHAT WORK DID YOUR WORKING RELATIONSHIP WITH NGEMA START? AND HOW WELL DO YOU TWO GEL AS A WORKING TEAM?

I first worked with Ngema on 1906, a play about Bhambata.  I had worked at the Royal Shakespeare Company and with Cont Mhlanga in the townships of Bulawayo, so I knew how to deal with the disciplined and physically hard work of Ngema’s Committed Artists.

It draws on the culture of the iBhuto (military regiments). When you work in a Committed Artists rehearsal you connect with a whole lot of people who carry the traditions of black South African theatre right back from Gibson Kente. That was wonderful.

Then I worked as dramaturge and director with Ngema on his one-man play, The Zulu. I was also script editor for him on the film of his play, Asinamali, and have now directed Woza Albert.

TELL ME ABOUT YOUR EXPERIENCES DIRECTING “THE ZULU”AND WHAT THIS MEANT TO YOU AND NGEMA.

We worked together to provide a compelling and contextually relevant structure for The Zulu.  The play drew on a whole Zulu oral history that Ngema had received from his grandmother.  It focused on the battle of Isandlwana.

The driving idea we came up with, was the question, would the Zulus survive?

The play then jumped to Ngema celebrating his grandmother for keeping these stories alive by hiding them in the storytelling centre of the Zulu kitchen so he can speak them in public in South Africa with a Zulu President in place.  So the play’s emotionally trajectory was very self-affirming for the audience.

Rehearsing The Zulu was tough because Ngema was going back on stage as an actor after about a 27-year absence. The play made great demands on him and he had to get in shape.

I was directing but also working with him a bit like a coach for an athlete.  It was that kind of tough-love challenge.  Also, Lesley Manim did great vocal training with him.

HOW OFTEN HAVE YOU WORKED WITH NGEMA AND WHAT WHAT HAS BEEN MOST REWARDING FOR YOU IN THIS PARTNERSHIP?

I have worked with Ngema since 2006. I love working with him. He is smart and an exceptional talent. I use the word beyond that to mean someone who is very good at what they do. He has an intuition and spirituality about his work that you can only know working closely with him. All that makes him irresistible to work with.

I am able to provide a good sounding board and to provide challenges for him. He often works with me to develop conceptual sharpness and structure for his work.We work very quickly together and have developed a high level of trust. 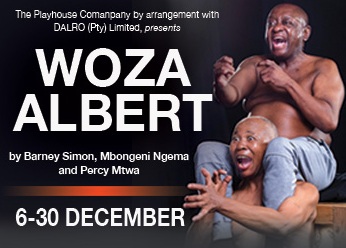 Ngema warned me when we first started working together that he has many detractors as well as a very strong audience that supports him. I have seen that. Often I have been criticised for working with him and he has sometimes had to defend his choice to work with me.

It seems now I only get asked to direct or work on scripts by Ngema.

YOU ARE CURRENTLY INVOLVED WITH AFDA IN DURBAN?

I am currently working as dean at the AFDA Durban Campus. I had been working for the past six years at AFDA in Cape Town.  I had been dean there too.

I returned to Durban this year and am happy to be back.  I have very strong connections here. I had been a lecturer at UKZN since 1997, before I moved to Cape Town.

WHAT NEXT, THEATRE WISE, FOR YOU AND NGEMA?

We have nothing planned. Ngema is working on a big musical but I am not involved with that project.

I have run projects at Westville Prison and in Bhambayi, so will probably engage in something with a social context.

I think Woza, Albert might, and should, play in other centres in South Africa.