HENK Swanepoel admits that he had been nursing a hangover the morning in 2002 that an estate agent pal rang him and pleaded with him to haul himself out of bed. Henk was not keen to budge, but was so very glad he did.

The reason was that the friend was inspecting a hillside property in Ballito’s Madeleine Drive that he was certain Henk would love, and which was about to go on the market.

It offered panaromic views which, Henk readily admits, took his breath away the minute he arrived at the property, which was just around the corner from where he was staying at the time with his longtime partner, Thomas. They had moved to Ballito from Westcliff,  Johannesburg, the year before.

There and then, Henk offered to buy the property which overlooks one of the few remaining (and protected) natural swamp areas in KwaZulu-Natal. He paid R4,5million for it – for the view alone: a 180-degree, elevated, totally uninterrupted, sweep of the Ballito waterfront, the sky and the Indian Ocean south to Durban Bluff and north to Zinkwazi.

Henk did not care for the Spanish villa-like home on the property back then. “Frankly”, he says, “the walls looked as if they had cellulite”.  He also did not like the sprawling back garden of lawn and frangipani trees that ran for most of the length of the 2600 square-metre property.

So immediately Henk began to formulate an idea of the house he wanted there – entailing a complete rebuild and an all-new garden. He envisaged an 850-square-metre modern home where, with one exception, all rooms had full frontal glass doors and balconies with ocean views.

He later designed the home himself, and the dream became a reality after four years, some headaches and a few more millions of rands spent. 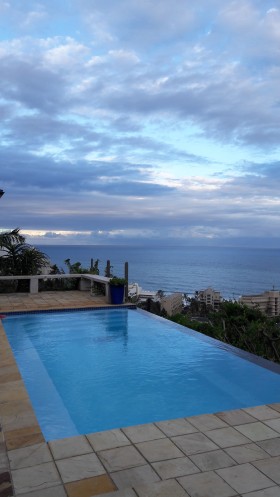 “We faced unbelievable hurdles,” says Henk. “We could not get any machinery past the house so all the pilings and the retaining back wall had to be done by hand. Also, there was an underground river leading to the swamp at 17m down and we had to get 27 pylons down 47m for bedrock, by hand.”

As if that were not enough, there was also the headache of the retaining wall comprising 64 cubes of soil that had to be taken around the house by wheelbarrow.

“Our engineer was pedantic and very difficult, but after 16 years there is not one crack in the house.”

The home today is most impressive and it is easy to understand why Henk has it booked solid for the rest of the year, with only an odd day available here and there.

The beauty of it, besides its peaceful setting and luxury touches – loved the welcoming Lindt chocs and wine, and the Dove soap in the bathrooms – is that the house is a short drive to the beach, restaurants and shops, and a scenic 15- minute drive from the airport.

Henk and Thomas have been living in London since 2004, but visit the house every few months – most recently for Henk’s flamboyant, musicals-themed 50th birthday party in October.

They initially put the home on the market for R11million when they decided to emigrate to the UK, but then opted to rent it out for a while before turning it into the guest house it is today – “a haven of comfort and tranquillity”, as the 36 Madeleine Drive website states.

The two-storey house showcases large windows throughout, plentiful light and space, and a beautiful indigenous garden of orchids and other exotic plants which edge the short driveway that leads to a double garage and the home’s front door. 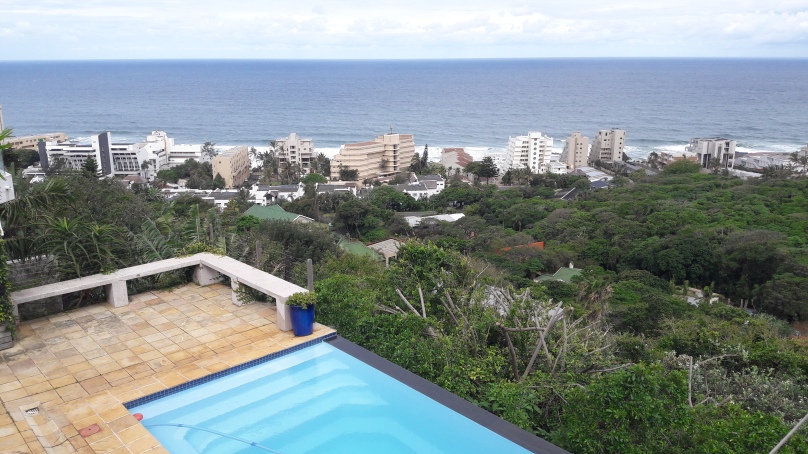 At the back is an inviting infinity pool at the hillside’s edge. It overlooks a natural forest of indigenous trees and shrubs which occupy two-thirds of the property. Keen gardener Henk lovingly planted everyting himself in the space that once accommodated the lawn and frangipanis.

Birds of prey often hover over the forest below and at night, listen out for the reed frogs and crickets. You are also likely to spot monkeys as Henk made a point of planting a small banana grove and papaya trees in the bottom corner of the garden, where he says no people have been in more than a decade.

The house’s four upstairs bedrooms include a massive master suite with its own large bath, walk-in wardrobe and pebble-walled, open-plan shower with three shower heads.

The main bedroom leads on to an outside patio/braai area with magnificent views and an eye-catching stone bowl filled with water and floating candles.

On the ground floor is an enclosed braai and dining area alongside an open-plan kitchen with pantry and scullery. A few steps away is a spacious TV lounge with large windows overlooking the lush greenery of the front garden, while a smaller lounge area is to be found closer to the pool.

Most people who stay at the home tend to stay four or five days at a time, and a Dutch family stayed for a fortnight recently.

A cleaning service can be arranged at R200 a day should you request it, and all linen and towels are provided, along with a full bouquet of television services including DStv, Netflix and Showmax options.

The out-of -season rate for the entire house, which offers 24-hour security and has air conditioners in each bedroom, is R4500 per night. The high season rate is R7500 per night, and peak season is R8500 per night. 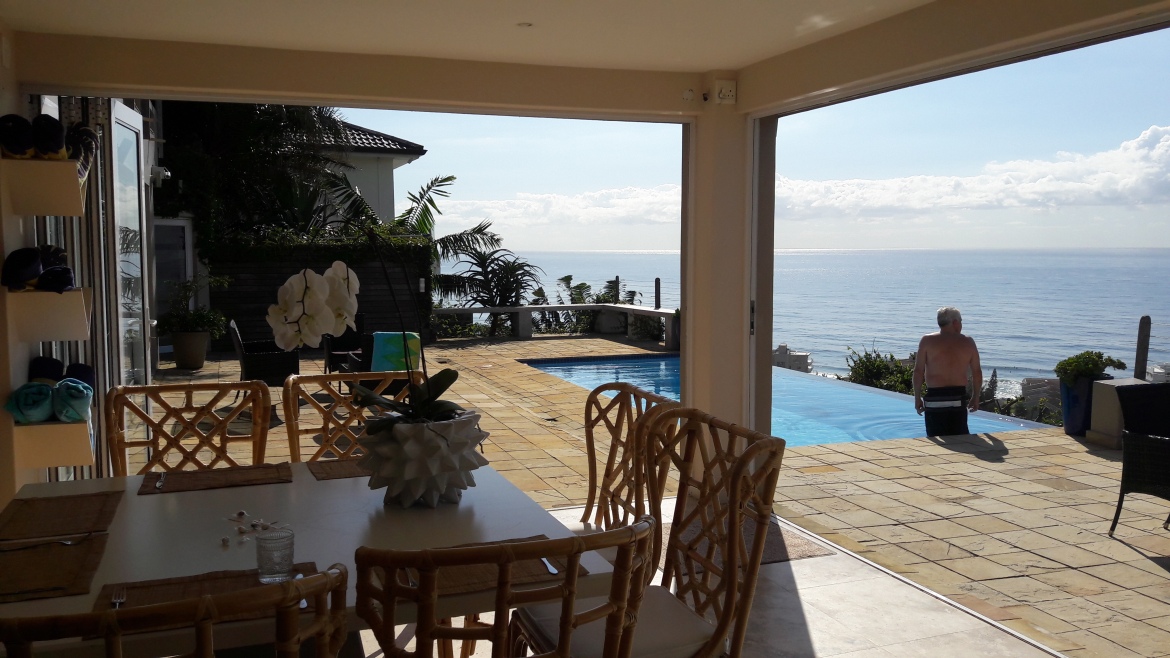 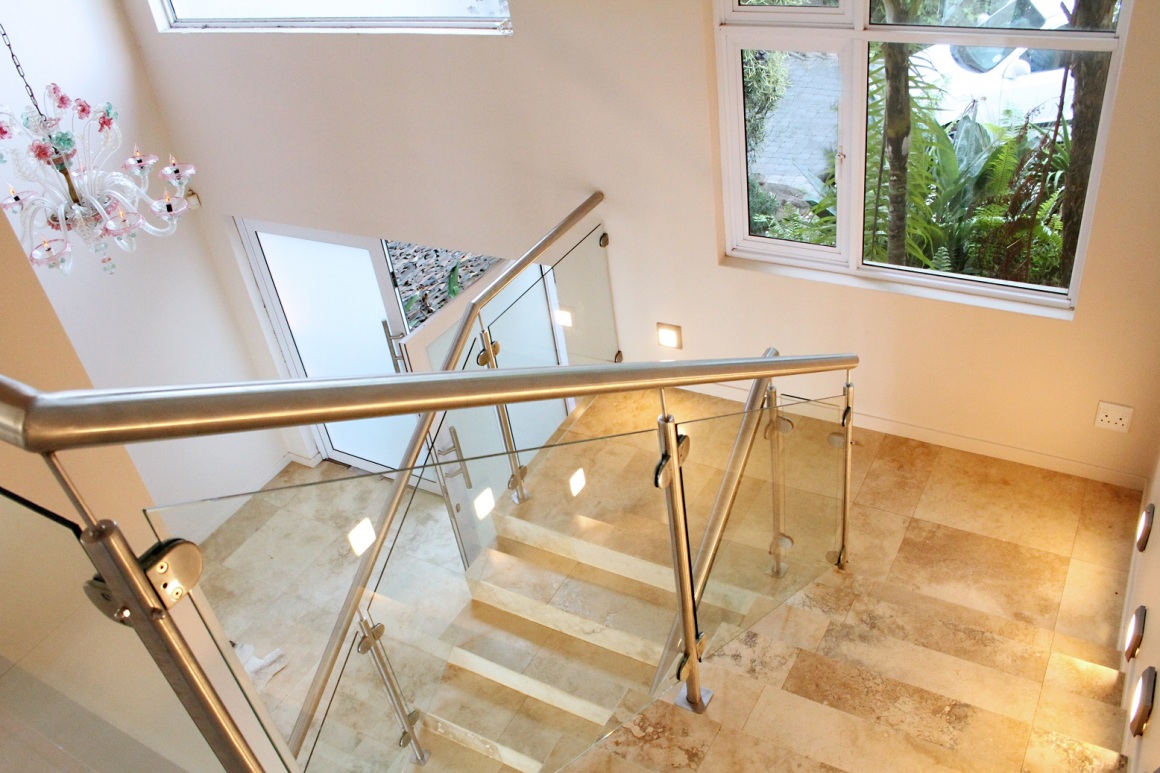 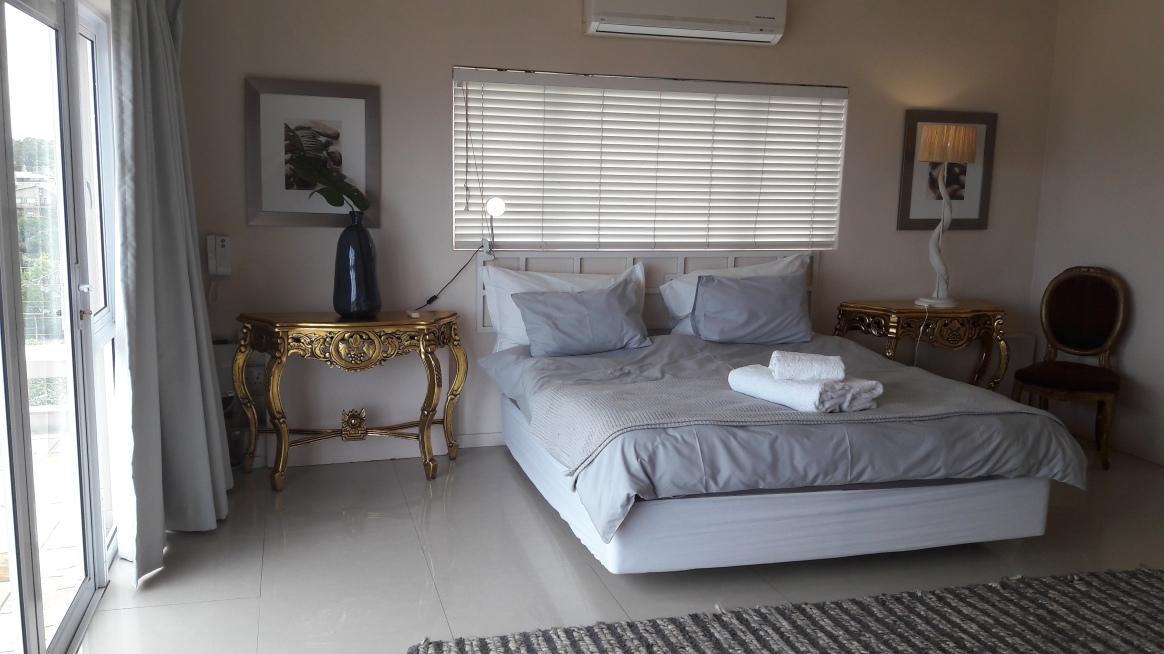 2 thoughts on “One of the best views in Ballito”