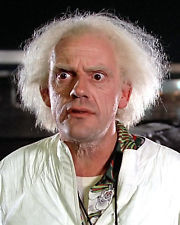 The star of the Back to the Future films, Christopher Lloyd, turns 82 today, while actor Jeff Goldblum turns 68 and recording artist Shaggy turns 52.

The movie Now, Voyager, with Bette Davis, premiered on this day in 1942, while this day in 1984 saw Paul McCartney release his Give My Regards to Broad Street album.

At the top of the South African singles chart on this day in 1971 was Mammy Blue by local group Charisma. It spent a record 12 weeks at No 1. Just saying…