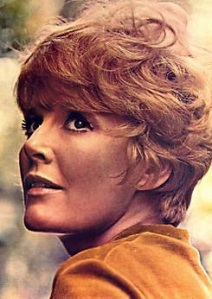 Singer Petula Clark (pictured), who had hits with Downtown. This is Your Song and Don’t Sleep in the Subway, turns 89 today, while Frida Lyngstad , the brunette in Abba, turns 76 today.

Actor Edward Asner, of The Mary Tyler Moore Show, who died on August 29, 2021, would have turned 92 today, while Grace and Frankie actor Sam Waterston turns 81.

This day in 2015 saw Bruce Willis and Laurie Metcalf team to star in a Broadway stage adaptation of the Stephen King thriller, Misery, the film version of which won an Oscar for Kathy Bates.

On this day in 1994, Julie Harris played Amanda Wingfield in the Roundabout Theatre Company revival of The Glass Menagerie. Reviews were best, however, for Calista Flockhart as Laura. She went on to play the title role in TV’s Ally McBeal.

The Gerry and the Pacemakers  hit, You’ll Never Walk Alone, was crowning the UK singles chart on this day in 1963. The song spent four weeks in the top spot. Just saying…