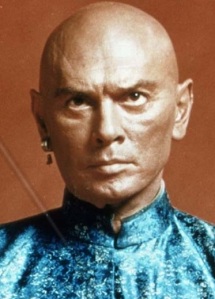 Interestingly, this day in 1987 marked the first US airing of anti-smoking ads on television. The ads featured actor Yul Brynner (pictured), who died of smoking-induced lung cancer in October 1985.

This day, in 1992, marked the Broadway opening of Crazy For You, a  musical by George Gershwin which was a reinvention of Gershwin’s Girl Crazy. The new production added 13 Gershwin songs, ran for 1622 performances, and took the Tony Award for best musical. I caught this magical show at London’s Savoy Theatre in 1994.

The song topping the UK singles chart this week in 1994 was Without You, the Mariah Carey cover of the much-better Nilsson original that topped the UK chart in 1972. Carey’s version spent four weeks at No 1. Just saying…