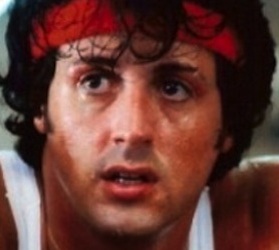 On this day in 1985, actor Sylvester Stallone (pictured in Rocky), and then aged 39, married Rocky IV actress Brigitte Nielsen (then 22), while on this day in 2008 pop star Madonna divorced British director Guy Ritchie, after years of marriage.

Remember the Do They Know It’s Christmas? single by all-star band Band Aid? Well, it was 35 years ago today that it first hit the No 1 spot on the UK singles chart, where it stayed for five weeks.

Also note that on this day, in 1997, Spice World The Movie, starring pop group The Spice Girls, had its premiere in Leicester, London. It went on to be nominated for a Golden Raspberry Award as worst movie of the year.

Still with music… on this day, in 2003, Courtney Love was sentenced to 18 months in drug rehab, while Don Johnson, hit-maker and star of television’s Miami Vice, was born on this day in 1949.