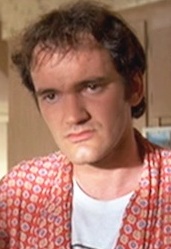 It was on this day in 1998 that Quentin Tarantino (pictured) and Marisa Tomei starred in a Broadway revival of the 1966 thriller, Wait Until Dark. Tarantino, director of films such as Kill Bill, Reservoir Dogs and Pulp Fiction, played the psychotic stalker who preyed on a blind woman (Tomei).

Still on Broadway… on this day in 2001, a revival of the Stephen Sondheim and James Goldman musical, Follies, featured a cast including Blythe Danner, Treat Williams, Gregory Harrison, Marge Champion and Joan Roberts, reports Playbill.

On the music scene, this day in 1954 saw Elvis Presley record his debut single, That’s All Right, while this day in 1963 marked The Beatles receiving their first silver disc, for Please Please Me.

On this day in 1985, Loverboy by Billy Ocean rose to the top of South Africa’s Springbok Radio chart, where it remained for 11 weeks. Just saying…