Joanita Venter has a Diploma in Food Preparation and Cooking from The City and Guilds of London Institute, as well as a Preliminary Wine Course from the Cape Wine Academy.

She started her career in food as a trainee chef at Alpine Heath Resort and Conference Village in the Northern Drakensberg. This was followed by a stint as Chef de Party at the intimate Shamwari Game Reserve, before her first move into the ‘major league’, at the Sandton Convention Centre, feeding thousands of people on a daily basis.

In 2006, she joined her mentor, chef David van Staden, in equipping and running the newly built pastry kitchen at the Tsogo Sun Elangeni on Durban’s Golden Mile, as Executive Sous Chef/ Pastry Section.

The opening of the new Oyster Box in Umhlanga, in 2009, precipitated her latest career move, to Executive Sous Chef Pastry.

In 2013, Joanita won the Confectionary Showcase title at the Unilever Food Solutions Chef of the Year Competition, one of the country’s foremost food competitions.

What is the biggest challenge creating and presenting the daily High Tea?
Our pastry kitchen is a very busy operation. In addition to preparing daily for the High Tea, there are a number of other outlets within the hotel that we cater for, as well as for room service. Our biggest challenge is the co-ordination of the operation, to ensure all items are out at the correct time, in the correct place. We also bake for the A la Carte menus in our restaurants. 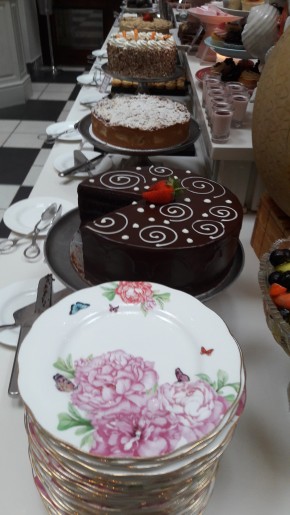 How many cakes/biscuits on average are created for the Oyster Box High Tea and what is the most popular?
In one month, we bake anywhere in the region of 250 cakes, 3000 biscuits and 4300 individual desserts. Some of our most popular items are Mrs. Tollman’s Cheesecake, traditional Carrot Cake, Macarons and our Milk Tart.

What time do you start baking and is everything made in the hotel?
We bake continuously throughout the day and night – with a Night Baking team coming on duty from 10pm to 7am. It takes the Pastry Team up to 24 hours to get all the treats made from scratch, fresh in-house daily.

What is your choice of the three best things on the treats table ?
Chocolate cake – who doesn’t love a good chocolate cake? Also Romany Creams, which bring back some wonderful childhood memories. And macarons – I love these because they are very technical to bake.

How many beverage varieties are there at the High Tea?
Bottomless servings of tea, coffee and fruit juice. One glass of sparkling wine per guest is also included, however guests are welcome to order any other beverages (both alcoholic & non-) for their own account.

Give some idea of the savoury selection and other treats one can expect?
We hav a  selection of sandwiches with a variety of toppings; a Midlands cheese platter; Chicken liver pate and Prawn cocktail.   All the sandwiches are made with our homemade signature Oyster Box bread. Also on offer is a total of 22 sweet treats and cakes including Milk Tart, Granadilla Cake, German Tea Cakes, Madeleines, Macarons, Cake Pops and Red Velvet Lamingtons.

How long have you been serving High Tea at the hotel and what do you think its appeal is?
The High Tea has been running since the re-launch of the hotel in 2009 and has become one of Durban’s most sought-after ‘things to do’, especially when celebrating a special occasion. People love the fact that the whole experience, from start to finish, is so special and quite unlike anything else on offer . The ambiance, service and quality that is associated with The Oyster box High Tea are all contributing factors. We also have live piano music every day.

Have there been any amusing or other memorable moments while trying to get the daily High Tea sorted?
There is always something on the go that may not seem amusing at the time, but is often amusing after the fact / in retrospect.

How long have you been overseeing the high tea table?
Since 2009 as Executive Sous Pastry Chef.

Any changes planned for the High Tea?
We make small changes on an ongoing basis, so there is always something new and interesting, especially for patrons who come regularly. We also have special/themed menus which we serve to celebrate a special occasion, event or season… or just to offer something unusual (eg: Easter, Women’s Day, Japanese High Tea which included Japanese sweetmeats and& sushi etc). One example very close to my heart was the “Charlie and the Chocolate Factory High Tea” last November; this made me think out of the box and we managed to put together an extremely creative and delectable buffet that was our most popular yet.

The high tea, of course, is but only one thing to enjoy at this historic hotel, which, alongside the landmark red-and-white lighthouse in Umhlanga, started out as a cottage called The Oyster Lodge, built on the grounds in 1863.

According to the hotel’s website, that cottage was made of  Burmese teak, corrugated iron and reinforced concrete, and the structure was originally used as navigational beacon.

In 1952, the cottage and overgrown grounds were sold to Ken O’Connor and his sister, Kay.  They started a tea garden, which became a restaurant, and then The Oyster Box Hotel, which opened in March 1954, on the site next to the lighthouse.

In 2006 the property came up for sale. The then owner, Wayne Reed, particularly wanted the Oyster Box to pass on to a family who would continue the hospitality, traditions and values for which the hotel was synonymous. Stanley and Bea Tollman (the Founder and President of Red Carnation Hotels) purchased the property.

Although very run down at the time, with a number of changes and architectural interventions having been made in the 1950s. it was The Tollman’s vision to restore and develop the legendary Oyster Box Hotel to its original glory.

The greatest challenge was to restore the property in a way that was authentic to the period in which it was built and simultaneously bring it into the 21st century.

The hotel we see today is a fitting tribute to their vision.

Building began in October 2007 and was completed in September 2009. According to the website, while a number of the original landmarks remain intact in the new structure, the hotel was, for the most part, re-built.

The grand, revolving door at the entrance (originally from the Royal Hotel in Durban), the familiar wrought-iron balustrade and original, inlaid hand-painted tiles and friezes, collected by Kay Hill on her regular travels to Europe, can still be seen.

The recognisable black-and -white checkerboard floor has been re-instated throughout.

The double-volume Palm Court, with skylights allowing the natural light to flood into the courtyard area, is at the heart of the hotel, with The Ocean Terrace and Grill Room restaurants leading off on either side.

An entirely new floor level was added to create additional banqueting space, conference, business and meeting facilities, and the impressive Lighthouse Bar, overlooking the iconic red and white lighthouse and the Indian Ocean.

VALENTINE’S DAY DINNER DANCE
February is the month of love, so why not consider treating your loved one to a Valentine’s Dinner and Dance any evening from February 10 to 14?

Accompanied by a six-course plated menu, the silky-voiced chanteuse, Cat Simoni, will put you in the mood for romance.

A MASTER CLASS
A Master Class at The Oyster Box is one of the hottest tickets in town. Brush-up on your satay, sushi and stir-fry skills and impress the family with your Asian Cooking skills. The afternoon begins over sushi and sparkling wine in The Oyster Bar, followed by a tutorial in the kitchen.

SPA MAGIC
Celebrate your togetherness during Valentine’s month with a Romantic Together couple’s rose quartz massage in The Spa at The Oyster Box. Followed by a glass of sparkling wine; it’s the perfect expression of love. All treatments booked include use of the plunge pool, tranquillity lounge, and spa snack buffet. 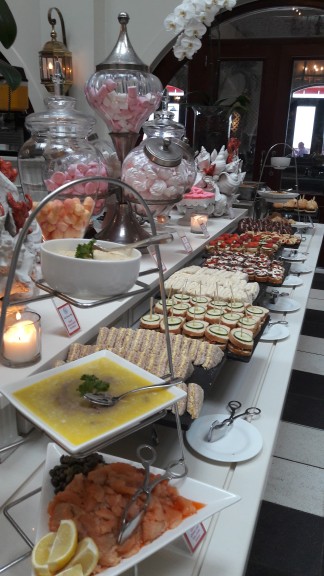 PAMPER PARTIES
The hotel’s Spa Ladies’ Night Pamper Parties are ladies’ nights with a difference. Treat yourself or bring your friends and make an occasion of it. The evening includes a glass of bubbly and canapes on arrival and a choice of two treatments. Early booking is encouraged…these popular events fill up fast!

SKABENGA HIGH TEA
Indulge in a whacky weekend of deliciousness at the Skabenga and The Chocolate Factory High tea in The Palm Court. Skabenga, the hotel’s resident cat, welcomes you to an oompa-loompa tea-time extravaganza, in the magical world of Willy Wonka… the world’s most loveable candy-man. Delectable sweets and treats, psyche-licious cakes and fountains of bubbling chocolate are yours to enjoy for the entire weekend.

CURRY MASTER CLASS
Executive chef Kevin Joseph presents a curry master class and a three-course dinner. Watch as he expertly demonstrates dishes incorporating Indian-style cuisine. Your dinner will include some of the dishes you’ve seen him prepare and you will go home armed with recipes, hints and tips for recreating your meal at home.

The healing properties in the salt helps to relax the muscles and aid in detoxing the body. All treatments booked include use of the plunge pool, tranquility lounge and spa snack buffet.

EXTRAORDINARY EXPERIENCES
The Oyster Box offers live entertainment every day of the week.

The Lighthouse Bar is open daily for cocktails and snacks, with live music on Thursday and Friday evenings from 6.30pm to 9.30pm.

An a la carte menu as well as the popular Curry Buffet is served in this casual venue and it’s the perfect spot for breakfast and sundowners.